Demo screens of BRPG being used for wargaming

Find or advertise games. Show us how you use BRPG and/or BGE!

Demo screens of BRPG being used for wargaming

In these examples of a Battlestar Galactica space combat game, I used Battleground's Health Status halos to denote relative shield strength, but the halos can be disabled if this is something you don't want the enemy to know.

I chose a grey hexgrid at 60% opacity, which I thought looked best against the space backdrop.

The space backdrop "map" was designed to be used at normal zoom. It pixellates a bit when zoomed in. 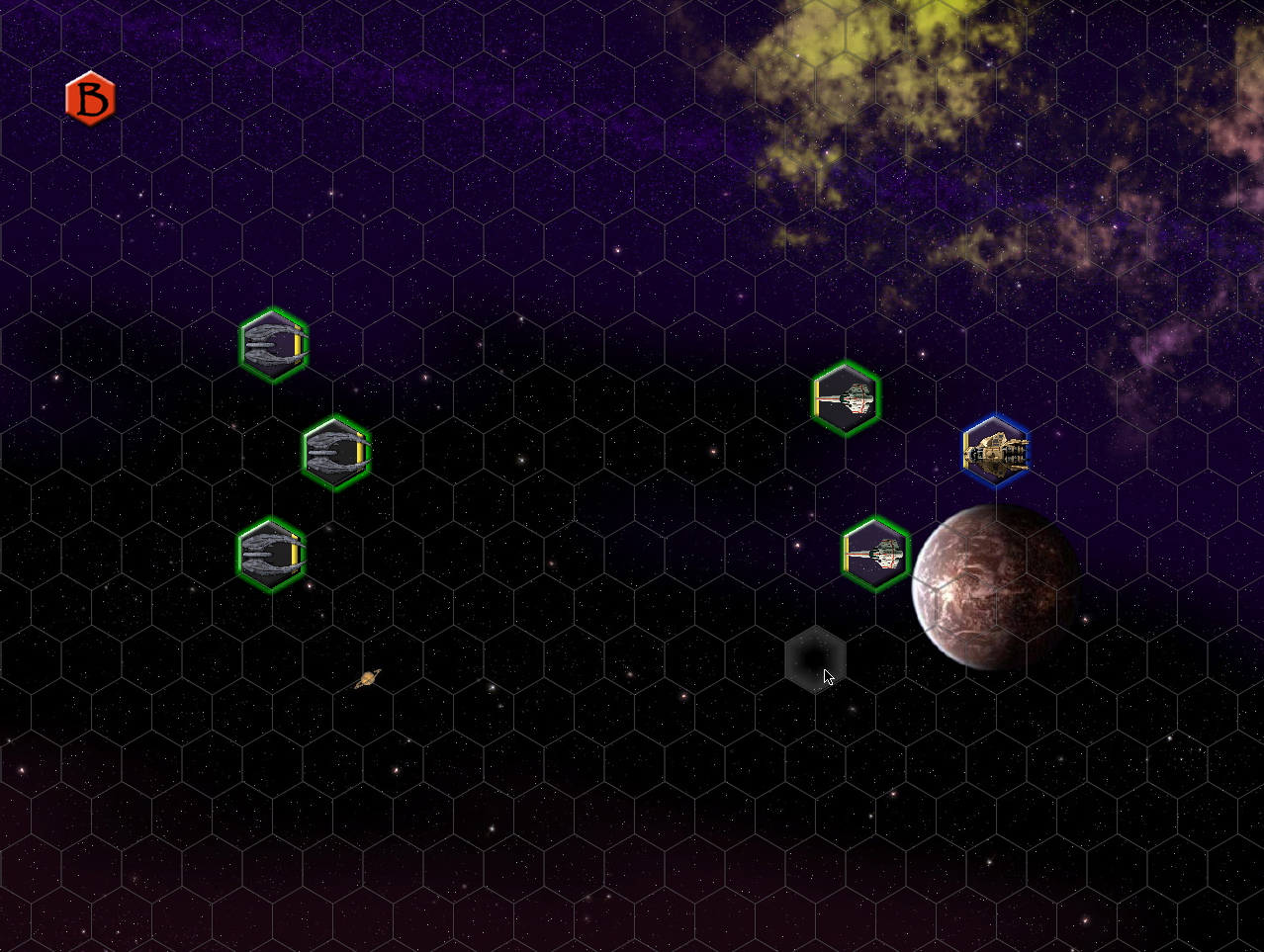 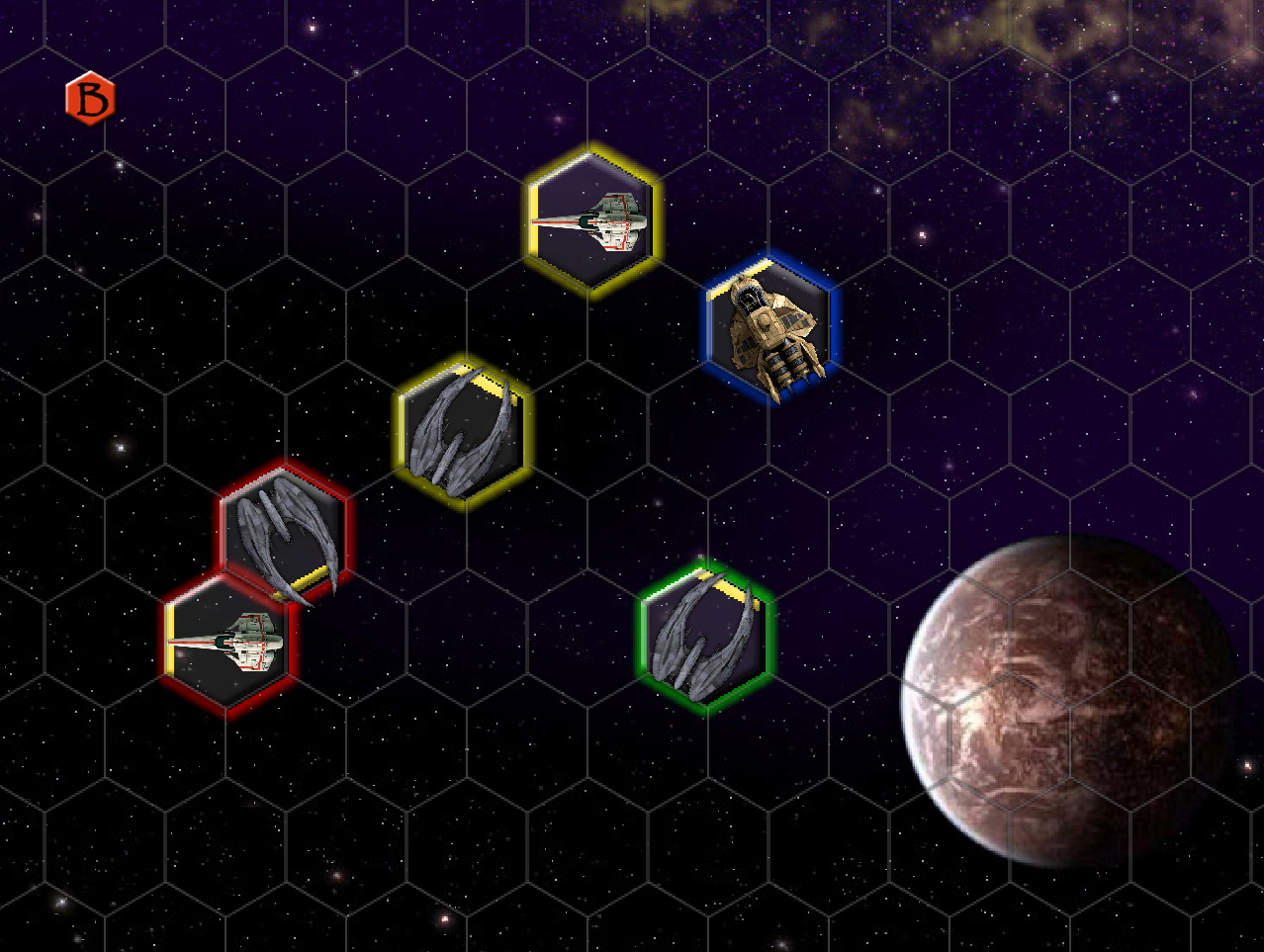 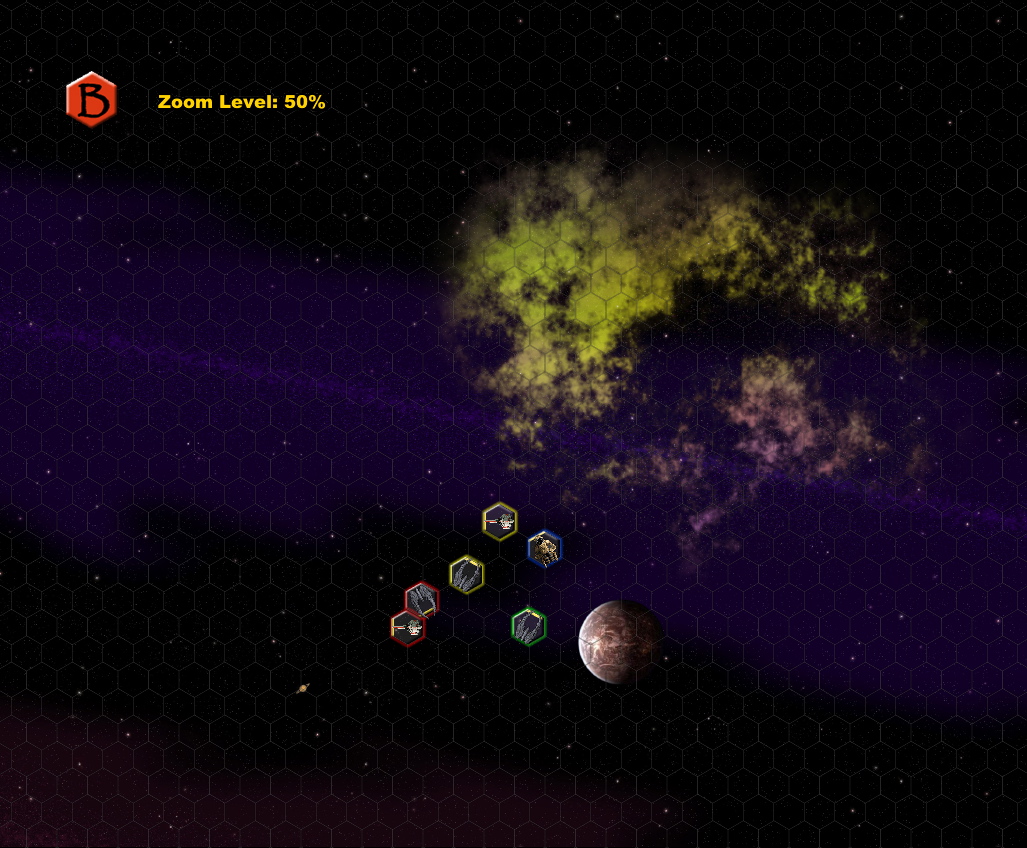 With the appropriate sound effects played on cue, and explosion overlay markers for kills, this makes for a pretty exciting way to play these sorts of games.

Heh, It'd be pretty neat to use the Fog of War feature to simulate sensor range. In this case the Raptor (a scout ship) would have a huge "light range", compared to the smaller ships.

Oops! For those screenshots I forgot to turn on unit labels so you can track who is who.

I am currently looking at using BRPG to do Battletech \ Mech Warrior I will post some screen shots as soon as we are up and running.

the idea of using FoW for Scanner range is great and I like your use of the Health auras. Your description brings to life the possibilities of the program thanks.
Top

I'd be very interested in seeing those pics. I know a good source of Battle Mech tokens, if you need some to pull this off.
http://rpgmapshare.com/index.php?q=gall ... temId=1808
(or better yet, run a search there for the word "mech")

At some point I'd love to have the means of handling double-blind Fog-of-War better, so that games like these can be run fairly without a GM/referee. In the meantime, the FoW enhancements coming soon in v1.0.8a might help some.

Well Thanks for your speedy reply.

Yes the idea of a Double blind Fog of War game without someone having to be Gm-Ref. is the ultimate but it looks like that with my Bro Gm-Referring it will still be Very very cool.

the feature allowing a Sub GM to control the bad guys looks great. Thinking of having guest enemy commanders in the campaign My Bro Has written for our online game . It will also allow players who can't make every session to jump into the battles when they can play.

I am already thinking of how to use the campaign map facility with battle force to provide a fully regiment to lance battlefield.

Your Notes on light sources and masked objects sound really promising for night combat and line of sight accuracy combined with a blue filter for atmosphere and flash animations for gunfire it should look spectacular if we can get enough time set aside to make it all work. looking forward to Bwargames but BRPG is really good already.
Top

Yep, this does look promising...

Looks very cool. With the new 'any image as FoW mask' in 1.0.8a (which is sounding like it ought to be 1.0.9, by the way) might it be possible to have the map and the FoW images identical? That way the stars would remain seamless and whole, while only vessels within sensor range would be visible...
Balesir
Top

Yes, Balesir, that's a very good use of the FoW Overlay feature.

Another might be to have a slightly different image than the players expect. An example: The Millenium Falcon approaches Alderaan, after it has been destroyed by the Death Star. As the Falcon comes within "sensor range", the planet that is supposed to be there is replaced by a mass of asteroids and rock debris where the planet used to be.

Please help spread the word about BRPG and BGE, and never hesitate to tell me how I can make them better suit your gaming needs.
Top
Post Reply
10 posts • Page 1 of 1