I haven't had the chance to test internet connections in a while. I'll try to set something up soon.
Top

Glad you got it running. I wasn't even aware you were having connection problems.

meh, not a problem , I wasnt going to complain I generally do have issues due to all the security I throw up on my machine, So I assumed it was that.

Ive been testing it on my Fiance's machine with friends since RC2a but she had a direct line, so when I saw the portforwarding it dawned on me, heh.
Top

There's a website that can help if folks need instructions for their router (as BGRPG spreads bwaaahaahaa) It has a number of different brands *and* models, with instructions for a wide variety of programs and of course "generic" instructions.

I cannot vouch for the site's correctness or anything, but thought I would share since we hopefully will be getting more people with more routers that might need help! I'll also post this in the links section.
--Tlichie
Top

Here's another example of how to set up port forwarding, this time on a Belkin router. The text is slightly cropped, but the port being forwarded is 1626. Note that the port type needs to be set to TCP, not UDP.

heruca wrote:If your computer is behind a router or firewall, you will need to forward port 1626 (or whatever port the GM and players have agreed to use) in order to connect to others online.

If you're not sure how to do this, consult your product's manual for instructions.

Here's an example of the proper settings, in this case for a Linksys router. 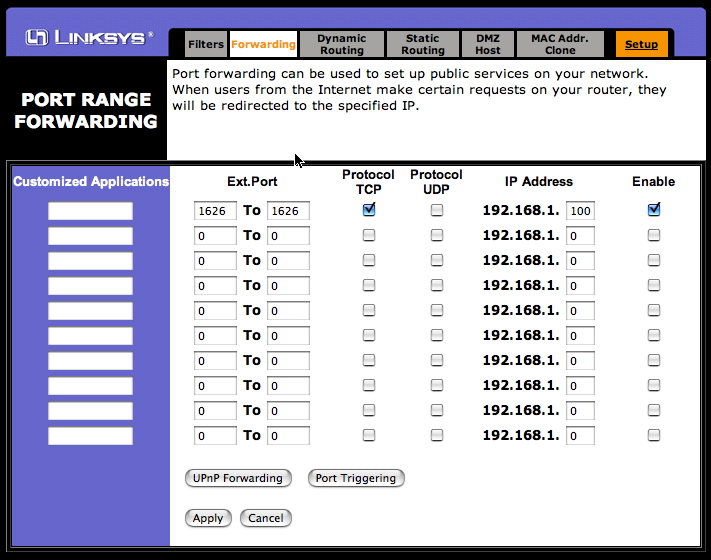 Routers are generally configured from your web browser. Just type in the router's IP address in your browser's URL field, hit return, and supply the proper username and password. To get to the screen pictured above, I had to click on a yellow "Advanced" button.

Be sure to specify the proper internal IP address for your computer, and don't forget to press "Apply".

Okay, I opened port 1626, I set up my LinkSys router as shown above, and my Norton firewall detected and asked if I wanted to allow BRPG access to the internet (which I approved)... but my players still could not connect.

We're all using the Battlegrounds v1.2, they have the correct port and my external IP address, and I have no idea what's wrong or what to do next.
Top

Doesn't Windows have its own firewall, too?

Yes, though it's crap.
Norton firewall may disable it automatically, since having two firewalls on can cause interferences.

To check if it's on:
Go to Network Settings, right click on your connection, go to Properties, and select the Advanced tab.

You should just turn it off if it's on.
Top

I didn't think I had it enabled, but I double checked anyhow.


Nada. Anything else I should be checking? Would there be anything on the player's end that would interfere... firewalls, internet settings, something else?
Top

Can you take the router out of the equation, even temporarily, to rule it out as the problem-causer?

Have you tried any other ports besides 1626?

I also wonder if your ISP might not be allowing incoming connections for some reason. Might be worth a call to their tech support (although I know that can be a hellish ordeal).

Are you sure Windows firewall is off.

As far as I can remember Norton switches it on when Norton is turned of and you need to explicitly turn windows firewall off.

You have two more things to check, first that your ISP isn't rotating your IP address (that as heruca says needs a service desk call) and second that your internal network isn't DHCP and has given you the same IP address as you put into the router (run ipconfig from the dos command line).

You can also try to ping yourself (external IP) and as a last resort run a port scanner:
http://www.t1shopper.com/tools/port-scanner/

It will boil down to one or more of three places: the outside world can't see your router, the router isn't sending on to the right internal IP, or the internal IP is blocking its ports.
Top

Hi, I believe I have set up port forwarding appropriately (I use sveasoft's firmware, and have other ports successfully forwarding), but I still get a timeout when I try to host using the demo version of battlegrounds.

I set up forwards for both 1626 and 5000, and haven't managed to host anything successfully.

Is there a way to verify that the port forwarding is functioning properly? I would like to figure out if the issue is in my router, or if I am missing something else...
Top

Allen, are you by chance on a wireless Mac? Some Macs can't host wirelessly (although they can join games just fine), and I believe it has to do with the particular router combination.

If you're on Windows, do you have any other software firewalls that are on? If so, you need to open up a port there, as well.

I AM trying on a wireless mac, as it turns out. I am downloading the windows client to try it from a wired windows box on my network to see if that is the issue.

Out of curiousity, what exactly is causing the timeout? Is my mac trying to connect to that port on my network's ip address?
Top

well, it appears to be an issue between the router and the mac, because my windows box CAN host a game without issues.

This thread may hold some useful info if you're going to dig into the issue. A user called FuLeng seemed to have no problem getting it to work, but I think it's due to his router, rather than the Mac itself or how he configured it. As for me, I've now gone through 3 different routers, and I think only one of them worked for hosting with a wireless Mac.

If you can figure it out, I've got a prize for you.

I've spent some time trying different configurations to find what works and what doesn't.

I have been playing with
* a linksys wirelessgl router flashed with sveasoft's talisman firmware
* a linksys wrt54gs router
* a straight connection into my cable modem.

When routers were in the network, I was using them both for wired and wireless connections.

I have a windows xp box on the wired network, and a imac on the wireless network (running osx leapord) With the windows box, I have tried hosting on a gm client, and using a renamed demo client to connect

What works:
demo->gm client on the windows box, hooked up directly to the cable network, on port 1626

I'm hoping to have a friend assist me with hosting a server on his machine, and see how various configurations allow connecting to him (I don't anticipate that this will be a problem)

So I am wondering what wireless access points/routers people are using successfully to run and connect to a host in the same network. I don't have a lot of manufacturer diversity in my test, and would love to know if it is just linksys or not.
Top

You may be overcomplicating things by trying to connect with a client. The main issue here is that wireless Macs generally seem to be unable to host a game at all. They just stall out after the specified timeout period.

Here's another site that helps people set up port forwarding.

If you are a Mac user and you have a Universal Plug and Play (Upnp) router (this includes Airport Base Stations), this free port mapping program should come in useful.

I am a new Battlegrounds GM. I am trying to host on a Macbook Pro running OS 10.4 using an airport extreme base station (b/g). I have set up port forwarding for my torrent client and that seems to work fine. However, I can not get my computer to host a game. I just downloaded the Port Mapping software recommended above, but before I get to that, I wanted to throw out the question:

Has anyone used this or a similar configuration to host a game? If not, what is the solution? Should I physically hook my DSL line to my computer? Is there another option?


ReadMe wrote:Hosting over a wireless connection may not work on Mac OS X unless you disable other network protocols (e.g., Ethernet, Firewire, Bluetooth, etc.). This generally means disabling all network protocols except for Airport.

Hosting with a Wireless Mac

Heruca,
I think that worked. I was at least able to set up as a host. I am not contacting my potential players to see if they can log in.