Preview of the new Tile feature in RC2

Preview of the new Tile feature in RC2

The "map" is just a stone texture that serves as a background. The rest is made up of dungeon pieces (made by Vry, from the MapTools forum) that I placed as objects, and told BRPG to treat them as "tiles", so that they draw under the grid overlay, and are thus unselectable/unmoveable by clicking on the map window.

Note the semi-transparent secret door symbol and secret room. These would not show up at all in the player's view, since they're set to Hidden. 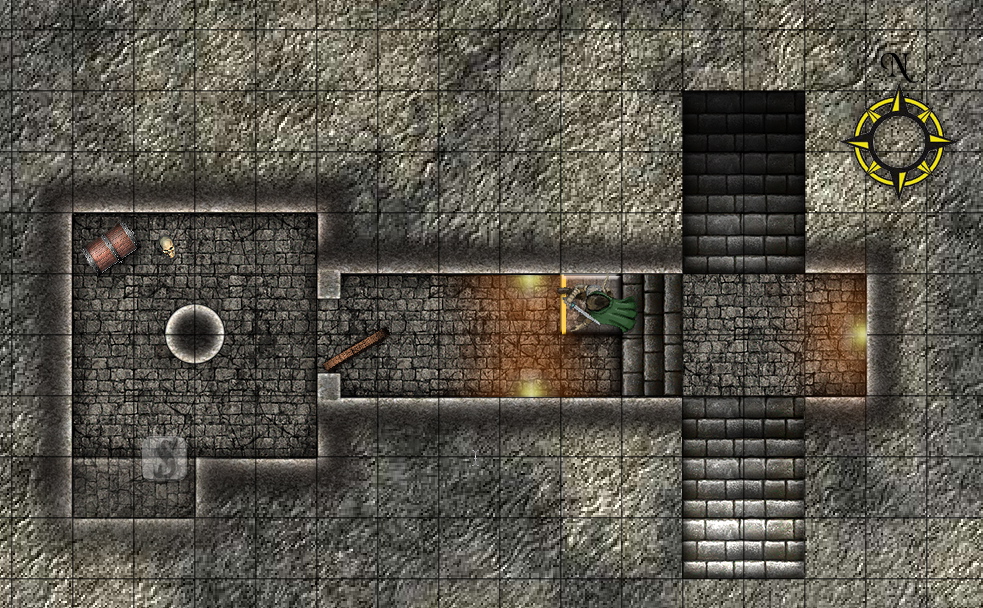 Here's another pic, with the secret door and secret room revealed. Now the GM and players are seeing the exact same thing. 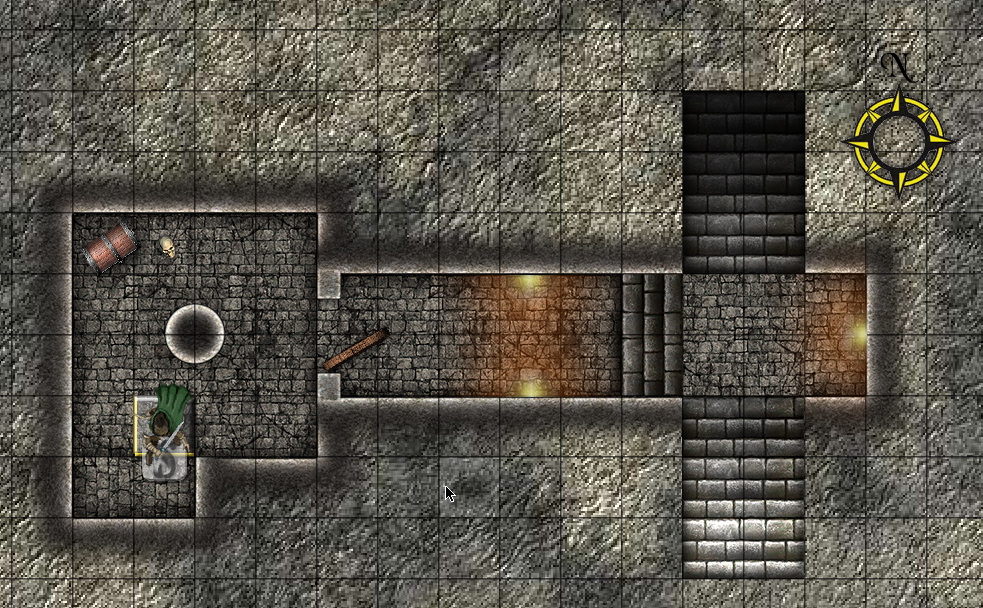 And here's the same setup, but I switched the "map" to an all-black background, which I think looks better (creepier). I rotated the door to a closed position, but I forgot to hide the room beyond when I took the screen capture. Still, it shows how the players would see the map while the secret stuff is hidden from them. Nothing there to give away the presence of a hidden room or door. 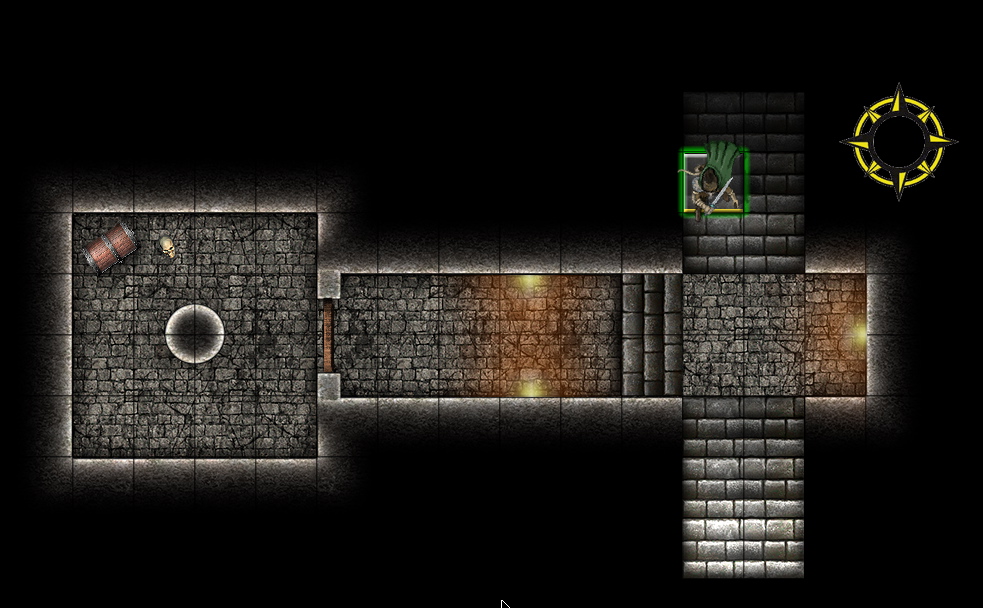 BTW, before making the sample dungeon layout above, I resized all of Vry's dungeon tiles in Photoshop so that there's no need to fidget with the scaling tools in BRPG.

This dungeon tile method of mapping works great with the dynamic Fog of War reveals in Battlegrounds, because by Hiding tiles until they're needed, it prevents light from "going through" walls and closed doors.

Oh, it also looks even better with the grid overlay turned off, as shown here. 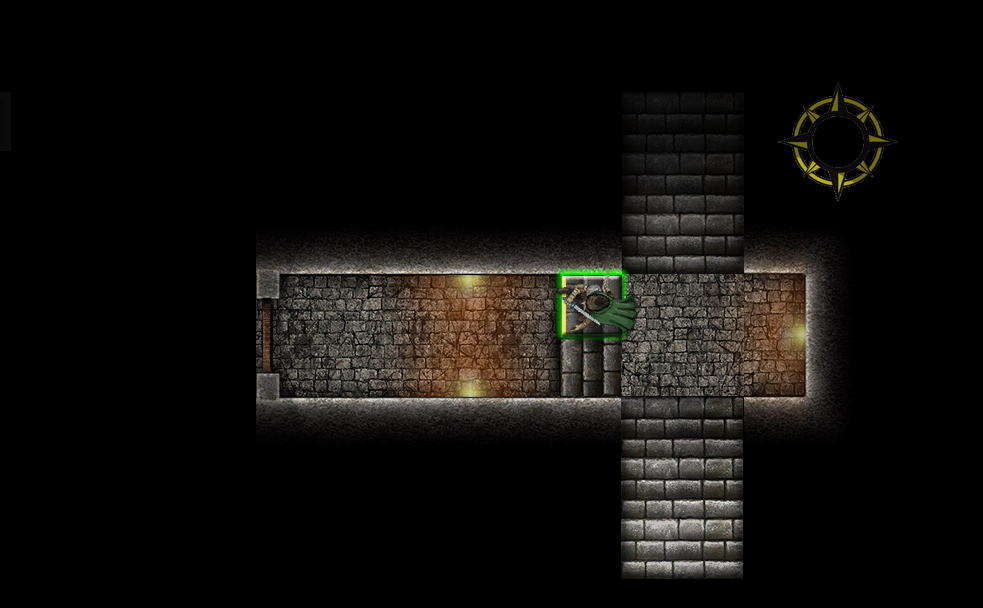 Another advantage to using dungeon tiles is that the encounters load instantly on connected clients, assuming the players already have the tiles and that they have whatever background pic you're using.

And when you do your how to's, please include this as a specific example...

Be sure to check out his maps.

These maps are works of art

They are beautiful and a source of inspiration

Good work Vry and thanks Heruca for posting this

Btw- I tried to go to that link andgot the following msg;

They changed it around since I posted the link. Here's the new link:
http://gallery.rptools.net/v/contrib/Vry/Maps/Bounded/

This "tile" function is rather kool.
I take it that I woud place my own graphics under the Objects folder?

Also, once you have "tiled" an object, is there any way to clear the tile? So if I made a mistake during mapping for instance, how do I remove the tile once placed?

Yes, tiles would go in the Objects folder (since anything placed from the figures folder will have a unit base, health halo, etc.).

A tile can be selected from the Unit Manager and then deleted, or "un-tiled".

Will be making tiles like these in the future

Looking forward to that, Kepli.

Please help spread the word about BRPG and BGE, and never hesitate to tell me how I can make them better suit your gaming needs.
Top
Post Reply
13 posts • Page 1 of 1

Users browsing this forum: No registered users and 7 guests